Greystone Golf & Country Club is known for excellence in golf instruction, including the Blackburn Golf Academy at Greystone, which helps player development in all ages and skill levels. We strive to create the best place for them to learn, practice, and thrive in the sport they love, from first-timers to the 15 PGA TOUR players who call Greystone home.

Mark Blackburn, co-founder of Blackburn Golf Academy, says that while most of the players have their own personal swing coach, the players are able to take advantage of Greystone’s practice range to sharpen their competitive skills. "Everybody's got a lot of talent and ability," Blackburn says.

All 15 professional golfers who are members of Greystone Golf & Country Club manage a busy playing schedule during the season, so you can learn more about them and follow their performance throughout the season at the following links:

These 15 players have developed a mutual relationship with the Club, and 11 are Alabama natives. "They're all very receptive to being involved with the club, and giving back to our members," Blackburn says. Appearing in live instructional and training videos on the course, including swing demonstrations and other helpful pointers, is one of the ways they do that. 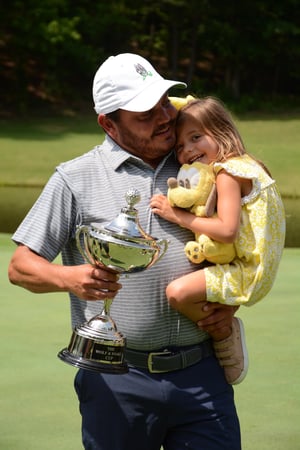 The inaugural Wolf/Snake Cup, held June 1-2, 2020, on the Legacy Course, is another. Bringing together most all of Greystone's PGA TOUR players for the first time ever, the event was a great way to get these skilled players on the course and bolster camaraderie at Greystone while touring is on hold for COVID-19.

Click here for photos from the 2020 Wolf/Snake Cup at Greystone.

"They love to play at Greystone. They've got somewhere they can ride a cart and play as many holes as possible."

As a Greystone member, you and your family can enjoy the best of Birmingham golf, and play where the Champions play. Download our free Membership Guide for information on membership options, golf privileges, family benefits, and more.