Highlights from the 2022 Regions Tradition at Greystone

The 2022 Regions Tradition was one for the record books. Steve Stricker became a two-time champion and set the tournament scoring record by finishing 21 under par. His 6-shot win is even more impressive when you consider how big a comeback it represents for him.

Stricker was forced to take six months off from golf after he got extremely sick with a mysterious condition last year. He tested negative for COVID, but spent two weeks in a Wisconsin hospital, unable to walk or eat - losing 25 pounds in the process. It was clear the win represented something bigger for him than simply coming out on top on Sunday.

“It’s a hard day, it’s been a long time, I hate crying, but where I was last November even to a couple of months ago. To come full circle here and come out and get a W it means a lot,” Stricker said after his win. “I’m looking forward to getting stronger and healthier and keeping this train rolling.”

Stricker’s wife caddied for him and Regions was the third straight week he was able to play in a tournament, hopefully, a sign his health is back for good.

Regions is already one of the longest-running events on the PGA Tour Champions and serves as one of its five major championships. Greystone is proud to host it each May and excited about the announcement from the PGA Tour that Regions will stay at Greystone for the next nine years as well.

The event brings together amazing golfers, big community support, lots of parties and fun, and fundraising for a great cause.

Since 2011, Regions has raised over $4.5 million for local charities (and more than $20 million since the tournament’s inception in 1992). Children’s of Alabama is the primary beneficiary of the tournament which includes money raised at the lemonade stand put on by Greystone children each year.

Stricker had high praise for the Greystone community, as he told the Shelby County Reporter. “This is a great area,” said Stricker. “We enjoy coming here as a family. Our kids didn’t make it this year, but they’ve been here the last couple of years. We just enjoy it,” he said. “There’s a lot of good restaurants, a lot of people around. 280 I think is the busiest road in America, but it’s a fun place. We get treated very well here at Greystone and people come out to support the event.” 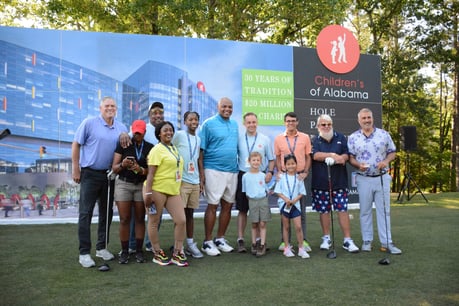 Greystone Members are a big part of what makes Regions Tradition so special. They turn out in large numbers and volunteer to help with many parts of the tournament. The week of Regions at Greystone is always filled with fun gatherings, concerts, great food, and lots of smiles.

The best way to experience the tournament is with VIP access that is available to Members exclusively. Download our Membership Guide to learn more.

Golf Around the World with Greystone - Shared Member Experiences

There came a moment during Greystone Golf and Country Club’s 2018 trip to South Africa when Terry...