Regions Tradition, the best golf event in Alabama, has perhaps the best lemonade in the state too. Just ask Bo Jackson.

Bo blew up on social media in 2021 when he dropped $100 after downing a cup at the Regions Tradition Pro Am. Before he tried it, he made it clear to the kids running the stand: Bo knows lemonade.

“If it’s good, I’ll give you something,” Bo joked. “If it’s not good, I’m gonna walk off, I’m gonna be mad.” He definitely left a satisfied customer.

Lemonade worth every bit of $100 for @BoJackson and @ChildrensAL. 🍋 💛 pic.twitter.com/8yebMSzc00

The best part is Bo’s generous tip will go to help the kids being treated at Children’s of Alabama. Since 2011, Regions Tradition has raised over $4.5 million for local charities (and more than $20 million since the tournament’s inception in 1992). The hospital serves as the primary beneficiary of the tournament.

Two Greystone Member families started the lemonade stand and this will be their fifth year doing it. Kelly Darden and Katie Wright are sisters. Their families both live in the Greystone community, along with their parents and younger sister. The Darden daughters, Avery and Emma Jane, set up the stand with their Wright cousins, Mary Kathryn and William, in their grandparent’s backyard. It’s on the 9th hole next to the tennis courts each year. 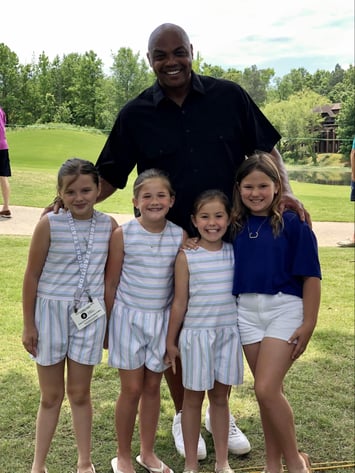 “In our family, donating is just something we've done and always made important,” says Katie. “The kids look forward to it all year long. They’re counting down the days.”

“When we meet with Children's hospital every year, they're very proud of the work that they've done and what they're able to donate,” says Kelly. “And they have a lot of fun doing it. I remember the first check they gave was five hundred dollars, and they were so proud of that.”

The lemonade stand has grown each year and now the kids’ friends help them out with running it. In 2021, they took in $1,300 from fans at Regions. The kids’ parents and other Greystone Members matched that generosity and the kids ended up presenting Children’s of Alabama with a $3,500 donation. They’re hoping to do even better this year.

“It's just a sweet thing for the neighborhood,” says Kelly. “It's a good thing for getting kids involved and really trying to teach them the importance of giving, being involved, and helping those in need.”

If you’re planning on attending Regions, make sure to catch the Celebrity Pro Am on Wednesday, May 11. That’s the biggest day for the lemonade stand - although it will be operating throughout the tournament (except when the kids have to be in school). Quench your thirst and leave a tip for the hardworking youngsters and their worthy cause.

The best way to experience Regions is as a Greystone Member. You’ll have VIP access to private concerts, Members-only areas (including the Member-only tent!), personalized badges, priority parking, and access to Cellar 91, featuring a stunning overlook of hole #18 from the back patio.

The Regions Tradition Member experience is a great annual perk of Membership, but the other benefits can be enjoyed every day of the year.

“We use the Club for all kinds of things,” says Kelly. “We have family dinners, we play tennis as a family, the pool is great - the kids love the new slides. There are so many things. It's not just golf, although both mine and Katie’s husbands love to golf here, it's so much more. There’s something for all of us to do and it's nice to have that in a neighborhood. It’s so family-oriented.”

The Regions Tradition: The PGA Tour Champions Return to Greystone

Greystone Golf and Country Club welcomes back the PGA Tour Champions at the Regions Tradition May...

Golf Around the World with Greystone - Shared Member Experiences

There came a moment during Greystone Golf and Country Club’s 2018 trip to South Africa when Terry...