The PGA Tour Champions Return to Greystone for Regions Tradition

Past winners include Jack Nicklaus, Tom Watson, Tom Lehman, Bernhard Langer, and 2019 champ Steve Stricker. Stricker will lead the field again along with past champions Langer and Miguel Jimenez.

A Cherished Moment in Time

Not only is this event a major tournament for the players, it’s also a cherished event for the members of Greystone Golf and Country Club who come together to host this storied event. The members elevate this event through their support in attendance and, more importantly, as volunteers. Each spring, a waiting list builds with members’ names hoping to be “inside the ropes” of this event.

“The volunteers seem to know that during five days in May, a magical moment can occur,” Club President Dale Gorham said. Learn more about being a volunteer!

In 2019, Regions Tradition volunteers took an extra step by bringing the event to the greater Birmingham community: Greystone officials and volunteers spread some Mother’s Day joy to Children’s of Alabama Hospital, delivering personalized gifts and care packages to mothers with a child in the hospital. Greystone Director of Golf Steve Smith said, “This feeling of giving is why the Regions Tradition is so much more than a golf tournament.”

Learning from the Best 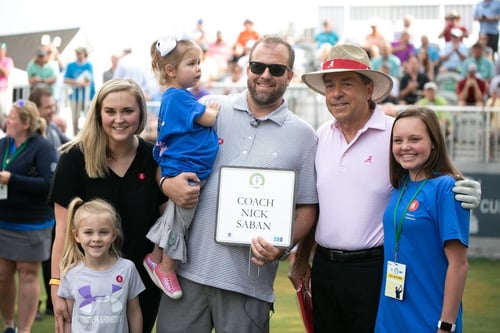 Participating as a Regions Tradition insider also has its perks. For Greystone members, it’s an opportunity to honor a valued business associate, niece, nephew, or grandchild by bringing them up-close and personal to the golf action. One of the best places to watch the Champions Tour golfers is on the practice range.

Smith admits this unfiltered access is one of his guilty pleasures. “I like to listen to the exchanges between the players and their caddies," he says. "Just observing what goes into the thought process of a shot is an education."

And if you miss the golfers before their first tee shot of the day, there’s always a chance you’ll find some of the game’s best players putting in some work after their round and into the evening.

“In 2019, a Friday round had ended, and I was getting ready to go home at around seven in the evening," he says. "Bernhard Langer walked by and said he was headed to the Champions Tour fitness trailer. After 18 holes of golf, the then 61-year-old Langer was getting a workout in. That’s dedication."

Connecting to the Past and Getting Pumped for the Future

In preparing for the 2021 Regions Tradition, Dale Gorham reflected on the recent past. “This past year really makes you thankful for what you have," he said. "The golfers are so grateful to be playing amongst the fans. I think when the Regions Tradition comes back on May 5th, we’re going to celebrate like never before. We’re so looking forward to the Champions Tour returning to Greystone and this will surely be the highlight of Greystone’s 30th Anniversary year!"

[Enjoy Regions Tradition as a VIP!]

There are a lot of ways to enter the game of golf: A relative who loves the game might introduce...

Greystone Golf & Country Club has grown into one of the nation’s premier clubs for two reasons....